In 1992 Rambhadracharya led the Indian delegation at the Ninth World Conference on Ramayana, held in Indonesia.[12][123] He has travelled to several countries, including England, Mauritius, Singapore, and the United States to deliver discourses on Hindu religion and peace. In 2015, Rambhadracharya was awarded Padma Vibhushan, India's second highest civilian honour. Rambhadracharya has been honoured by several leaders and politicians, including A. P. J. Abdul Kalam, Somnath Chatterjee, Shilendra Kumar Singh, and Indira Gandhi. Several state governments, including that of Uttar Pradesh, Madhya Pradesh, and Himachal Pradesh have conferred honours on him. 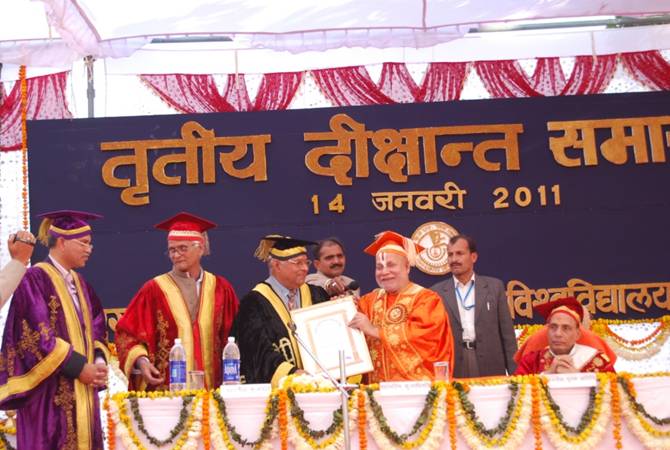 As a young child, Giridhara used to compose poetry in Prākṛta and Saṃskṛta effortlessly. While learning from his grandfather, he used to compose verses reflecting his emotions and view on the subject. Throughout his life, Jagadguru Rāmabhadrācārya speaks 22 languages, and is a spontaneous composer and poet (Āśukavi) in many Indian languages. He has to-date composed more than 80 Granthas and innumerable minor works. His magna opera include four epic poems; commentaries on Prasthānatrayī, Aṣṭādhyāyī and Rāmacaritamānasa; and a critical edition of the Rāmacaritamānasa.