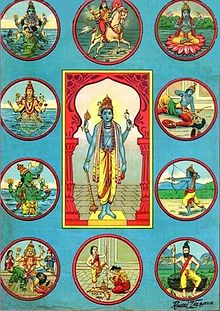 Dashavatara (Sanskrit: दशावतार, daśāvatāra) refers to the ten avatars of Vishnu, the Hindu god of preservation. Vishnu is said to descend in form of an avatar to restore cosmic order.

The list of Dashavatara varies across sects and regions. The standard list is as follows: Matsya, Kurma, Varaha, Narasimha, Vamana, Parashurama, Rama, Balarama, Krishna, and Kalki. Sometimes, Krishna replaces Vishnu as the source of all avatars and Balarama takes Krishna's place in the list. In other versions, Krishna may be dropped from the list and substituted by regional deities like Vithoba, Jagannath or Balarama.