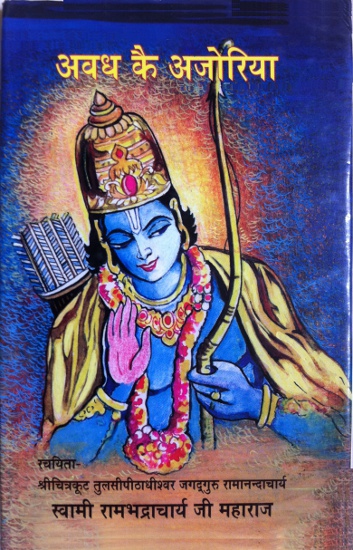 Avadha Kai Ajoriyā (literally - The Moonlight of Awadha) is a Prabandhakāvya consisting of Awadhi Sohar songs which was composed by Gurudeva in 2010. The work was published in 2011 by the Jagadguru Rambhadracharya Handicapped University, Chitrakoot, Uttar Pradesh. It consists of 125 Sohar songs in Awadhi language. The songs are enriched with Vātsalya Rasa and Bhakti, and will delight the connoisseurs of poetry and Awadhi literature. Awadhi speakers, folk singers/musicians and Hindustani classical singers/musicians will find these Sohar songs very mellifluous to sing on ocassions like birth of a baby, folk gatherings and music concerts.

Sohar (सोहर, also called Sobhar/Sohil) is a genre of traditional celebratory folk-songs (Mangala Gita) sung in northern and eastern regions of India. This genre of folk-music goes back to hundreds and possibly thousands of years. Sohar songs are popular in Braja, Awadhi, Maithili, Bhojpuri and other languages. The songs are sung primarily by women, on festive ocassions like birth of a child, Chatthi (ceremony on sixth day of birth), Barahi (ceremony on twelfth day of birth), and other folk and Vedic Samskaras. Some special Sohars are sung to put infants to sleep. Sohar songs are mostly woven around the infant Rāma or Kṛṣṇa, and Gaṅgā, Sarayū or Yamunā rivers. The two main Rasas in Sohar songs are Vātsalya Rasa and Bhakti Rasa, though sometimes the theme is the Aiśvarya of infant Rāma or Kṛṣṇa.